1MORE has added a wireless feature to one of its most popular headphones in 1MORE Triple Driver BT model. The result? One of the most interesting wireless in-ear headphones we’ve had in review this year. 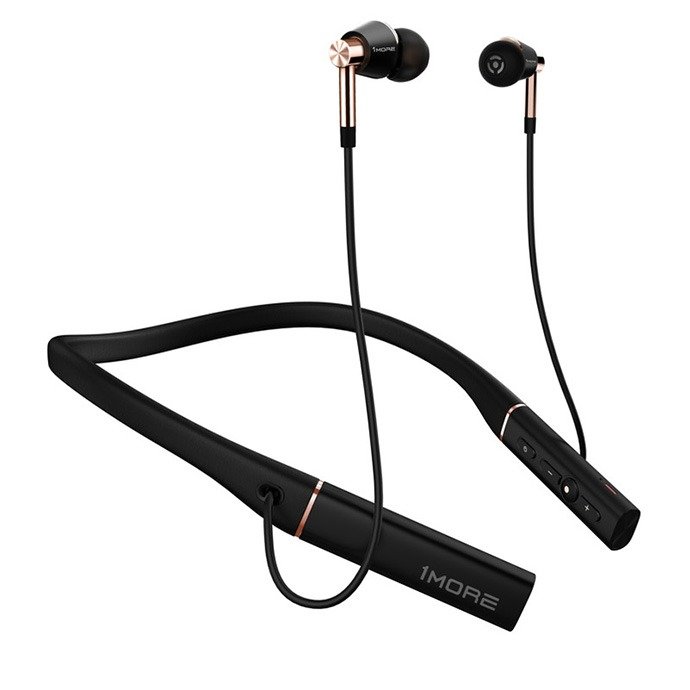 1MORE Triple Driver BT In-Ear Headphones definitely become a relevant player in the “mobile” sound field. They were provided with excellent design, rich accessories, and surprisingly good sound quality the system of three built-in speaker units instead of the usual one delivers. For the price of about 100 $ it was – and still is – an extremely convenient purchase for users looking for quality in-ear headphones. As the name suggests, the 1MORE Triple Driver BT is a wireless version of these popular headphones. It should be said that the price of the wireless account increased by 30$ and the acoustic performance remained practically unchanged. All the money you pay above the price of the Triple Driver’s wired headphones is given for additional wireless features and not for enhancements in the sound field. If the wire does not bother you the “ordinary” Triple Driver In-Ear is a more cost-effective purchase. On the other hand, for users who insist on cordless headphones, and these are many today, 1MORE has implemented absolutely everything the customer could wish for in Triple Driver BT so the customers of these headsets should not feel cheated at all because all additions are definitely worth the price difference.

The headphones are based on the popular “neckband” design, where the headphones are fixed with the wire to the opposite open ends of the “rim” that we put behind the neck. The part lying on the back of the neck is covered with a very fine rubber. The rubber achieves good contact with skin and clothing so that never happened to us to have our headphones slipped from the neck and ended up on the ground. The “half-rim” ends are made of solid silver plastic. Ear capsules are also silver-gray since they casings are made of aluminum alloy. Headphones generally look unobtrusive and beautiful and they are robust enough to carry a daily pull on their pockets of clothing and backpacks.
The end of the half-rim, which is placed on the left side of the neck when you use it, includes a few buttons – upper is used to turn on the headphones, and with the remaining three, placed on the inside, you control the sound volume, pause and swap the songs (double press for the next, the triple for the previous one) and answering the phone calls. The microphone is integrated close to the buttons and its basic task – voice transmission when making a call – is done flawlessly. It is capable of filtering the outside noise to some level which is very useful on the streets.

Behind the plastic door, embedded at the end of the “necklace”, there is a USB-C connector intended for charging the battery. It’s the only element we’ve noticed a possible problem. The little doors are fixed to the headphones with a thin piece of rubber which could be broken in case of negligent handling which would hurt the exterior of the headphones. Moreover, the slot itself is relatively narrow so that you will not match any USB – C cables, but only those with a thinner connector design (like the one that comes with the headphones box).
The built-in battery is sufficient for about seven hours of playing. This is not a great deal, so we’re happy that 1MORE has implemented fast charging technology. After just 10 minutes on the charger, the headphones will be charged enough to be able to use them for about three hours. Charging the battery to a full capacity lasts one hour. The remaining battery capacity can be checked at any time within the Bluetooth settings of the mobile phone and the female voice of the headphones itself will also occasionally inform you about the battery. The lady does not say the exact percentage of the battery. Instead of that she only says the general: “Battery High”, “Battery Medium” and “Battery Low”. It happens more often than we would like: several times we have heard her in very exciting shares in the song that we listened to so that our enjoyment was somewhat corrupt. It would be good to be possible to deactivate it or at least limit it to the case when the battery is at the very end but the headphones do not come with any kind of application that would allow that. 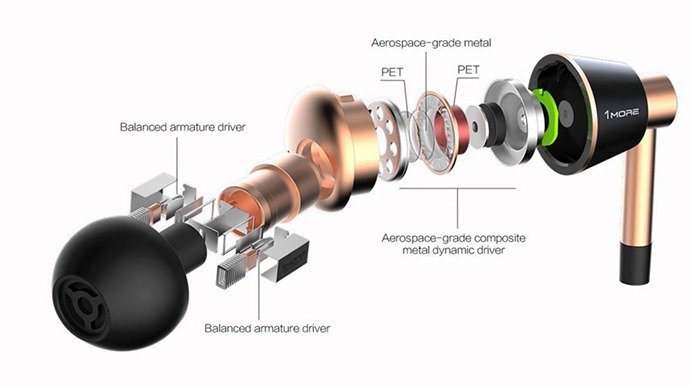 As mentioned earlier, the 1MORE Triple Driver BT’s ear capsules conceal three speaker units instead of the usual one. It is a standard dynamic driver with neodymium magnet and diaphragm-covered metal composite and it has a pair of balanced armatures. We would love to see support for both aptX and aptX HD, first of all, because it would expand the number of users who can extract all that they can offer from these handsets. This, however, does not mean that owners of mobile phones that do not support the LDAC codec should avoid these headphones. If you do not keep your files in FLAC format on your mobile phone but you already have MP3 music or stream it over with some service (Google Play Music, YouTube, Spotify, Deezer with a ‘regular’ subscription that doesn’t support HiFi playback), default SBC codec, which is supported in all mobile phones will be more than enough to deliver everything in the headphones.

The acoustic performance of the Triple Driver BT is practically the same as that of the wired variants of these headphones. In other words, the sound is full, satisfyingly detailed, and very fun, with high frequencies, which somewhat reduces the openness of the sound but also eliminates the fatigue of the ears during longer listening which we greatly appreciate with in-ear earphones. The bass is abundant and well-controlled throughout the range except for the lowest frequencies – those we hear less as a concrete impact, and more like a “rumbling” int he background. In these frequencies, Triple Driver BT is not overly detailed and in songs with an abundance of such, extremely low frequencies, somewhat blurring the entire lower frequency spectrum, and in extreme cases can even suppress the vocals. With this in mind, these headphones we would not necessarily recommend to users who have genres like hip-hop and extremely “bass” electronic on the daily repertoire. With all other music genres, Triple Driver BT is great and delivers a really good sound.
As always, to achieve maximum acoustic performance with the in-ear headphones(and the best passive isolation of the external noise) it is necessary to find earplugs of optimal size – those that will fill your ear canal and will not bother you. With 1MORE Triple Driver BT, you get nine pairs of earplugs(a combination of silicone and foam) in dimensions from 10 to 14.5 millimeters.

The conclusion can only be this – the transition of the famous and recognized 1MORE Triple Drivers from wired to wireless mode has gone flawless and very successful.