In this text, we will meet a turntable that under the attractive design hides probably the most radical technical innovations of this brand in the last 15 years. 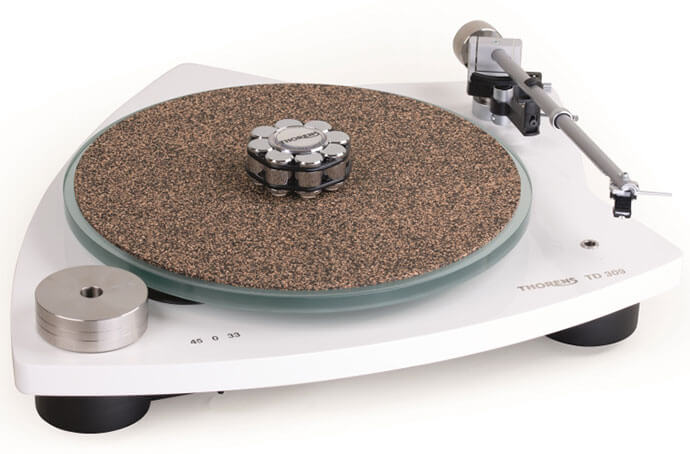 Thorens always associates the authors of these lines with a classic old-timer, with his elegant logo, like a long limousine wing, a massive appearance and a sub-chassis on springs that jiggle on touch. Since Heinz Rorer was once again alive this company, Thorens has adopted and applied new materials and technologies, but also retained some good construction features from the past that endured the test of time – a floating sub-chassis, for example – but technically completely different.

The TD 309 is a floating chassis turntable, on which, in contrast to earlier Thorens’ models, the floating top plate of a 22 mm MDF floats on three shock absorbers on a recessed triangular base from aluminum below it. This suspension called Tri-Balance is the work of Fink Audio Consulting from Esen, known in the field of speaker design, which is not a coincidence because the problem of mechanical and acoustic vibration should also be solved in the turntables. The designer Karlheinz Fink managed in the following way: back to the classical spiral spring since other manufacturers have long ago replaced spiral springs with the rubber and other materials in an attempt to lower their resonant frequency to single digits, and even Thorens, who transferred to sheet springs. And while the drawback of these latter ones was the unequal elasticity in both directions of bending, the spiral spring should have prevented the lateral shearing off the entire sub-chassis, well known in the classic Thorens. There is a borrowed solution from speaker technology so that the tip of each spring is fixed into a solid speaker suspension, like the small membranes in the middle of the springs. There is no longer a “jump” of the sub-chassis. The TD 309 relies on such three suspensions with the possibility of adjusting the force using the enclosed hexagon key, but this does not serve to adjust the level – use the washers for this.

The exceptionally quiet single-engine motor is not separated from the floating chassis as it used to be but is fixed to it by using the same two shock absorbers from the top and bottom, which prevents vibration. By moving the engine that is eccentrically placed in the circle hole in the base and fastened with one screw, it is possible to adjust the belt tension. The engine has external power and electronic regulation and speed switching; In addition to the speed selector, there are two small openings for access to trimmers that can be fine-tuned or corrected at both speeds. The transmission is done over the belt to an aluminum pulley with a platter of pure quartz glass weighing about 2.5 kilograms, with the necessary slipmat. The platter lies across the rubber ring at a 60.5-millimeter circumference, where the lowest platter resonance was calculated and measured.

TP 92 tonearm is specially designed for TD 309. It is made of rolled aluminum 9 inches long in a massive base. It runs in two axes and relies on four bearings of the Japanese MMB manufacturer, which are otherwise installed in mechanical measuring tools. The headshell is fastened with a single bolt screw to the tonearm, it can not be rotated, but it can be moved back and forth in a range of 2.5 millimeters for precise adjustment of the overhang. On the ideal tonearm, the headshell would not be mounted at the very end of the tonearm, but between the end and the middle, according to the calculation of the resonance. However, in practice, the resonance is additionally lowered by the uneven mass distribution on the body of the tonearm and the ring weight at the critical point near the middle of the tonearm. TP 92 has anti-skip settings, VTA and header height on the elevator, while anti-skating is with the magnet. The brunt of the entire tonearm is at the height of the needle. 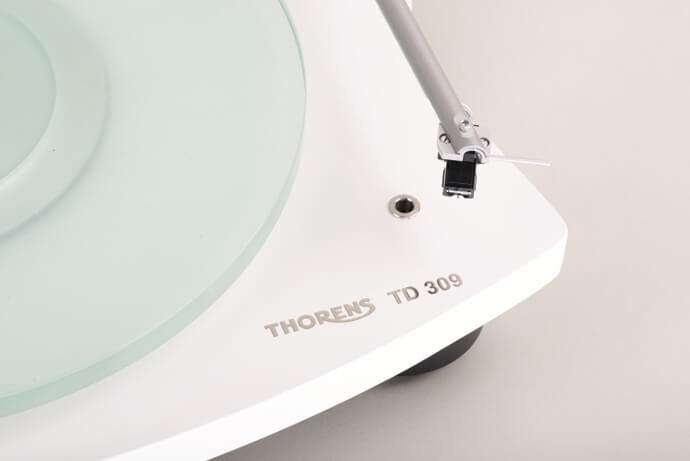 The futuristic look and color of the turntable rounds off the transparent clarity cover, which, however, also makes mechanical protection and dust protection, but only on the upper side. There are also a couple of interconnect cables, scale, libel, and protractor.

In the first version, the TD 309 was shipped with the head of the Audio Technica AT95B, later replaced by the lesser-known MM home head, Thorens TAS 267, MM with relatively standard specifications (elliptical top, 2 g, 3.5 mV, 47 kΩ ). After initial unpacking TD 309 is already set up and is ready for use immediately, including the checking of torque, tracking force, and horizontal level. Finally, on the turntable, we need to set a mysterious object in the form of a platter, but with a larger aperture – it is a counterweight on a rubber ring, which is positioned diametrically opposite to the tonearm base, over the shock absorber and plays a double role: establish a balance and, at the same time, further lowers the resonant frequency of the sub-chassis to about four Hertz’s.

On the special Thorens’ mat of pressed cork and rubber (purchased as accessories), we put live Milve and Astor Piazzola’s “Live at the Bouffes du Nord” album in 1984. Immediately there came a mid-range amusement: the smattering of Milve’s voice and her discreet, abrupt pronunciation runs in parallel with the accordion and the violin about the same scale and are well-differentiated, without confusion and struggle for domination. Voice and instruments – all with the right color and warmth. Already in the sequential numbers, the jagged piano, which struck at the deepest dirty notes, showed the sensation of rhythm and competence of this turntable, the almost-understanding of this genre of music, the piano as an instrument, and the sharp, powerful vibration of thick wires. The theater scene in which this live recording was made sounded wide and even though it did not miss the width, we had the impression that the depth was not equally represented in the reproduction.

At the end of the album, we wondered what it was that we wanted to listen to the whole. On cheaper sets of turntables, tonearm, and headshell of the same manufacturer it would be more or less implied; However, on the turntable of this class, the answer can only lie in very well-embedded “in house” components.

On the album “Live in Vienna” the dZihan & Kamien duo from 2004, the turntable had a different task: more aggressive material, a combination of electronic and acoustic instruments and a club environment. Since this music was abundant with creations and in general with high tones, space was now even better, and the high volume of fine texture, without grain, giving enough space for percussion to breathe. In a rather complex tone picture, the turntable keeps an excellent tone balance and the autonomous space of each instrument on this very purely productive album. The sharper electronic tones still do not bother with acoustic instruments and do not turn them into the artificial buzz, while the sound of the electronics is not heard as soft, but with a dose of the sharpness. Indeed, fans of either music were not dissatisfied with what they heard from their record. 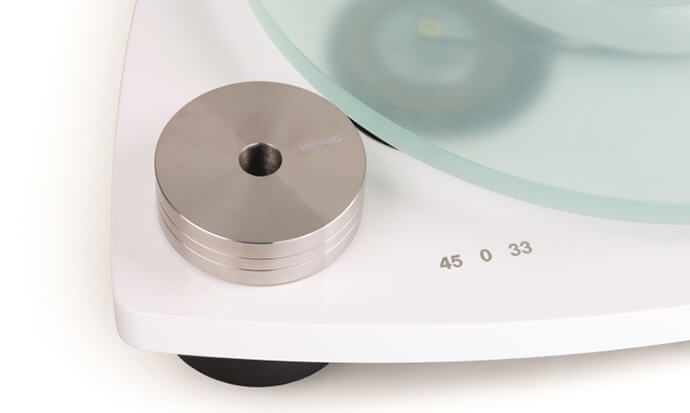 When it comes to rhythm, it is more than correct, but the TD 309 may be too shy and engineered to properly reproduce the lack of the ultimate indention of the listener into the music. Distance? Not. Partying? Not. Middle? It could be said: The TD 309 best performs itself at medium complexity and loudness, though, intuition and experience tell us so much, part of this impression would be fixed by cartridge change, even by switching to MC, for which the factory tonearm is very suitable.

If we had any doubts about the barely sharpening of the lowest octave on this otherwise very well restrained turntable, they were completely missing along with Thorens’ massive record clamp (additional accessories), which on the records that we listened removed the most subtle artifacts.

Here is a video of a Thorens TD 309 turntable in action:

The new construction with the sub-chassis as the main feature on TD 309 raises the advantages of this type of high-end turntable. In the tone language, it translates as a solid bass, the absence of coloration and a good stage. If you should describe the sound of this turntable in the shortest time, the TD 309 is a reputable reproduction player: competent and detailed with various types of music but not too analytic, although it may be less cautious and detailed and more vivid and more playable. Although we have not experimented with other cartridges, the upgrade from the factory to an even better MM or MC cartridge on the TP 92 tonearm can only bring even better quality reproduction in this highly harmonized system. It’s a hot recommendation if you want to replace your youthful turntable with a new one, without starting from the beginning, but to jump right into turntable of the next-generation. In our opinion, this is one of the best turntables under $2000 that money can buy.