It’s always worth waiting for the annual Berlin IFA for just one reason – the first official presentations have devices that will not be available until after some time. It resembles a fashion situation – the latest trends appear before the actual season, which allows you to organize the wardrobe and prepare for the arrival of the “new”. IFA is, therefore, a kind of compass of the latest trends and it is not surprising that it attracts the most important manufacturers from the industry, including, of course, the local, i.e. German.

This year’s Sennheiser presentation perfectly fit into this formula – the company showed that on the one hand it is not going to give up its style by presenting new headphone lines, and on the other it has presented something unusual (AMBEO surround sound system), prompting in what in her opinion it is worth investing soon. Among the presented novelties were, among others, Sennheiser HD 599 headphones which we had the opportunity to test before their official premiere in Berlin.

HD 599 replaces the HD 598 model, openly drawing on the experience of its predecessor, at least in terms of its appearance and materials used. At first glance, it is easy to confuse these two constructions. Beige 599s look almost identical to 598s in the same “coloration”. The difference boils down to a differently displayed logo (previously it was discreetly hidden under black mesh protecting transducers), replacing wood-like inserts with silver equivalents imitating aluminum or steel, slightly thinner lining of the headband and the color of the skin with which it was coated (brown instead of cream). The rest is indistinguishable, including both comforts of use and equipment. From the few information disclosed about this model, it is worth noting the use of E.A.R. (Ergonomic Acoustic Refinement) directing sounds exactly to the listener’s ears (the key is the special sound chamber located in the earmuff capsule, shaped for the propagation of the acoustic wave and built of appropriate materials). 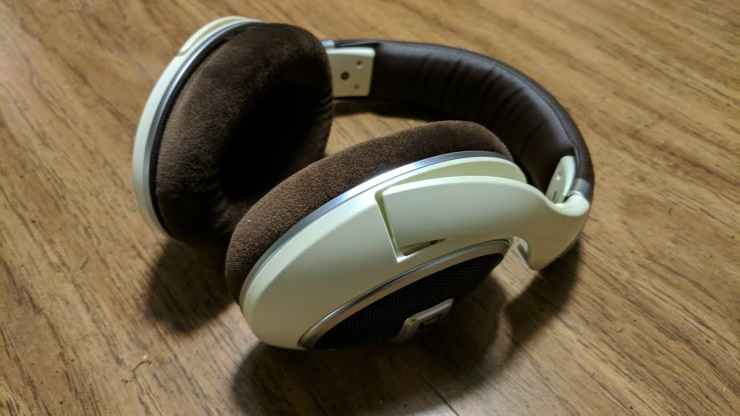 HD 599 also undoubtedly care for the user’s convenience: perfectly curved shells with soft, velour pads easily cover the ears, choosing the size of the headband does not cause any problems, and the lightness of the whole design means that the presence of HD 599 on the head is not thought at all. A 3-meter detachable cable led out unilaterally, from the left earmuff, its shorter “mobile” version (1.2m) with simple remote control and an adapter from a large jack to a small one is all we can find in a decent cardboard box with black foam inside.

The adapter is rather unusual (usually manufacturers attach adapters “the other way”, i.e. from 3.5 to 6.3mm), and its purpose is not entirely clear, given the presence of a shorter cable terminated with a small jack unless someone insists to connect a 3-meter long cable to a smartphone. It is worth noting that the open design is suitable for mobile listening and we can assume immediately that the 599, like the 598, is mainly intended for stationary listening to music, including a smartphone.

The designation of this model suggests that we are just a step away from the iconic HD 600 model. I think the 589 models were treated similarly, clearly cheaper than the “six hundred”, in some respects similar to them, but also has its character, mainly manifesting in shocking bass. I do not like the sound terms “shock with bass”, but probably everyone who had 589 on their heads would agree that instead of the bass they sometimes offered bass to fill every possible gap in the ear canals. HD 600 were and still are in this respect much less “modern”, i.e. simply more linear sound (which does not mean that it is perfect), which of course does not have to suit everyone. And how low tones “interpreted” the reviewed model? In this respect, it is the average degree between two extremes, the so-called golden middle. The bass neither overlaps nor tends to be ascetic, it is exactly as it should be.

High tones are high-end: they are clean, open and light, and the amount of so-called plankton, the smallest details that 599s are able to pick out from recordings, makes an amazing impression.

Even when listening to discs on which bass was not skewed (Paul Simon “Stranger To Stranger”, Radiohead “A Moon Shaped Pool”), one does not feel their exaggeration. But that’s not all – good control of this range is complemented by clear, transparent, and saturated sound colors. When needed, the low components can surprise you with real momentum and freedom, but even then each hit seems precisely programmed. The specific “violent storm” known from the HD 589 has given way to “accuracy of mathematical machine operations”, which turned out to be good for the whole presentation.

The terms cream and velvet match the diameter. There is always delicate warming in the presentation, just in time for the saturation of colors not to seem exaggerated. Thanks to this, we are not threatened by hardness or dryness, derivatives of extreme transparency, which usually tortures the ears like parental sermons. High tones claim to be high-end: they are clean, open, and light, and the amount of so-called plankton, the smallest details that 599’s can pick out from recordings, makes an amazing impression. Both the title recording from the already mentioned Paul Simon album, as well as another equally beautiful song “Proof of Love” even shone with the splendor of percussion instruments complementing the melodies. To all this, there is also the transparency of stereophony, which allows you to easily locate and separate individual virtual sources.

What Do You Need To Know About Sennheiser HD 599?

Many people mistakenly identify the open back design of the headphones with high ventilation shells. Meanwhile, the “openness” of the headphones simply means the lack of isolation of the transducers from the environment and easy air access to them. Hence the freedom and spaciousness of their message. Open back headphones are easy to recognize by the masks (reticles) from which transducers can sometimes be seen. The aforementioned lack of isolation from the environment means that the music “goes out” to the outside, so it is better not to use such open back headphones in public transport. 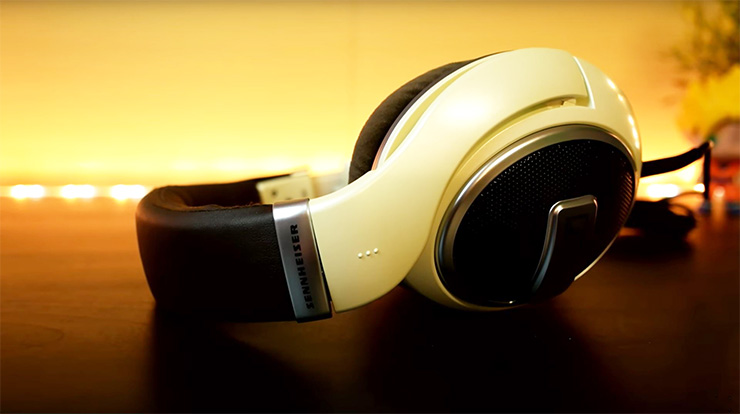 Either I was extremely lucky so far, or simply Sennheiser does not sell bad headphones. Sennheiser 599 will not, of course, threaten the position of the HD 800, but they are a serious competitor for HD 600. I won’t be surprised if many people will buy them rather than the old HD 600.

Overall: They are like a combination of a precision sound engineer and the favorite tool of a music lover to show the beauty of music.