The new Xtreme 2 sounds even better than before, lasts as long as ever and has learned some new tricks, like diving.

The first version of JBL Xtreme set a new standard among mobile Bluetooth speakers. The device was able to publicize a large party, delighted with dynamic and entertaining sound and bass, which could even be seen thanks to vibrating passive membranes. The Xtreme 2 model is a bit heavier and has larger bass drivers (70 mm instead of 63 mm), generates deeper low tones (55 Hz instead of 70 Hz), and is waterproof (IPX7 instead of IPX4). Check how Xtreme 2 works in practice. 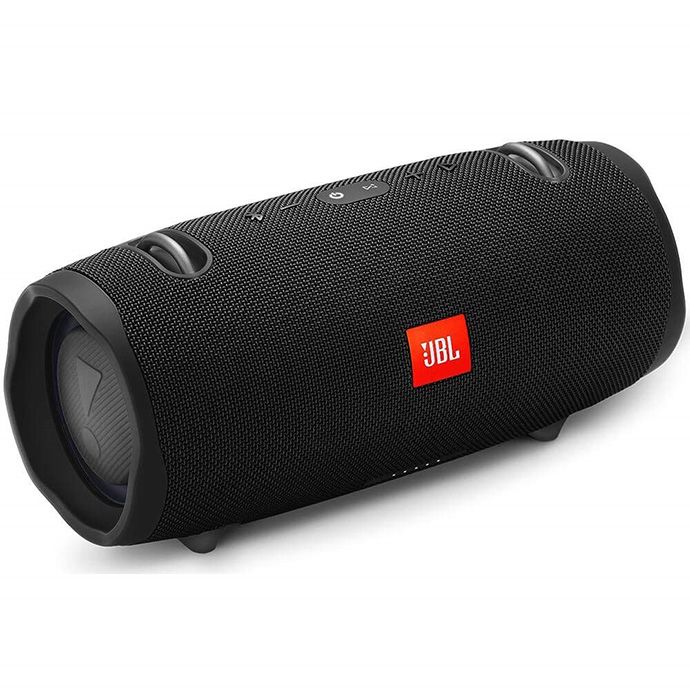 In the meantime, a huge (and rather expensive) Boombox has emerged, and smaller models such as Flip and Charge have undergone new modifications. According to them, we could guess what improvements Xtreme 2 should have – and we weren’t fooled.

Xtreme 2 is packed in a thick cardboard box and stabilized inside with solid foam molds. In addition to the speaker, the set includes a power supply with two detachable cables and a shoulder strap.

The power supply is a flat cube with double wiring. The integrated cable measures 105 cm, and the detachable cables are 110 cm each – one terminated with a European plug (type C) and the other with an English plug (type G). The strap impresses with its quality, it is a smooth and partially stiffened tape; on both sides are high-quality metal and rotary carabiners, and the size-adjusting buckle is also a bottle opener.

The Xtreme 2 is a slightly larger speaker than its predecessor, but the specific shape is retained. The level of water resistance has been increased to IPX7, which means it should withstand full immersion in water, up to one-meter level, and last up to half an hour.

The look is slightly altered, which is first noticed on the strap holders. The brackets are now made around the entire body of the speaker, which can be seen through semi-transparent plastic. The strap itself is wider than before and has metal rings. This is great news because on the old Xtreme one of the metal rings did not pass the 24/5/17 test, also known as: “24 hours with five seventeen-year-olds”. 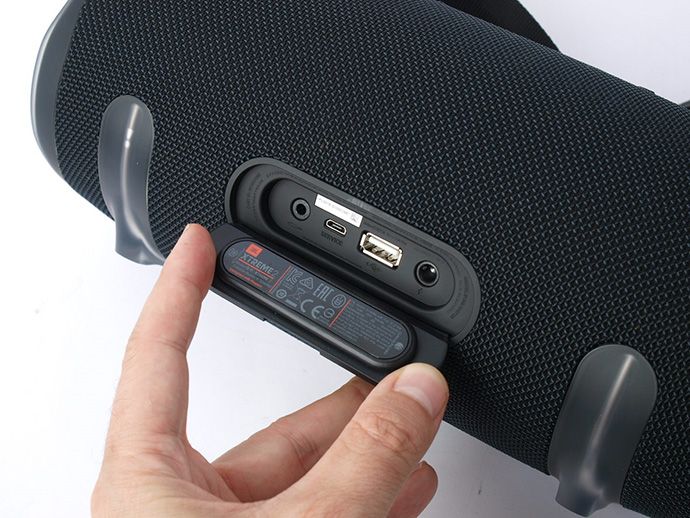 The rubberized cover protects the connection ports from water

JBL Xtreme 2 continues the assumptions of the series. The sound signature is again modern and musical. The sound can be described as “V” on sound equalizer because the bass and the treble bands are emphasized and the midrange was distanced. Entertainment was undoubtedly the priority, but the Xtreme 2 is not a typical bass speaker that emphasize the bass. The low bass range is emphasized, the medium range is a little bit muffled, as usual, and the treble is crystal clear.

The low tones do not silence the sound, the focus is on the quality of the band, not its quantity. The bass is not extremely loud, although this could be suggested by the name of the loudspeaker – but certainly not missing. The low tones impress with their depth, are compact and vibrating, and have an exemplary attack – the bass can hit hard. As a result, the sound is dynamic and engaging, the leg begins to tap the rhythm of the drums, and the head involuntarily moves in accordance with the beat. The final effect will depend on where you listen to music – in small rooms, the low tones can even overwhelm and rumble. The speaker performs clearly better in medium and larger rooms.

The medium band is withdrawn. Popular music, all kinds of electronics and rap sound better than jazz, blues, acoustic or vocal music. In lighter music genres, the sound is a bit artificial and cool. You can still listen to something calmer, listen to the voices of vocalists because the midrange has not been completely cut, but undoubtedly the music centered around the low tones leads.

Treble plays an important role as a bass. The sound is not sharp yet, the damping is avoided, but the sound is somehow cold. The treble has a crystalline tone. Again, this fits better with popular music than with live instruments. However, you can’t expect the natural sound of drum cymbals, solo guitars or strings – a light digital rush can be picked up at high frequencies.

The loudspeakers were placed on the front, so the music sounds in a directional manner. The curved casing favors the sound going sideways, but the music can be heard best in the loudspeaker line. They were placed quite narrowly, so the stereophony falls on average. The sound is bright, the instruments are perfectly separated, nothing blends together. You have to remember that to use the maximum capabilities of the speaker you need a power supply to be connected, then the sound power and bass increase. In small rooms it is better to keep a distance from the walls, in larger Xtreme 2 should stand close to the wall or in the corner.

As with the previous model, the Xtreme 2 can be connected with a 3.5mm audio cable, but the main mode should be Bluetooth. Bluetooth 4.2 is built-in, bringing in slightly less latency than 4.1 Bluetooth version, but is still probably above 40ms, which is the maximum allowed for a device to declare as “low latency”.

Of course, for a device like this, the JBL Connect app for iOS and Android is available, which allows you to set up stereo or party mode, upgrade firmware and manage speakerphone functions. As the world of audio keeps us confused with terminology, JBL is no exception. Specifically, the application and protocol by which the application and device function have the same name – Connect. But that protocol was upgraded about a year ago, so it got the suffix and is now called Connect +. It doesn’t seem to matter, but the older protocol allowed only two speakers to be connected, and the new “plus” allowed a chain of up to 100 pieces. Older speakers, such as Flip 3 and the first Xtreme, are not compatible with Connect +.

The device’s autonomy remained at a very high 15 hours of a gig, thanks to a 10,000 mAh battery, of course, depending on the volume being listened to. A 19V full-size charger takes care of the charging, and the charging process takes 3.5 hours.

Aside from the sound itself, which by volume and quality will be quite sufficient for outdoor barbecues and pool parties for up to fifteen people, the Xtreme 2 also comes as a power bank, as it has a USB output that supplies 5V/2A power to connected devices, so it doesn’t you have to fear that your cell phone battery will leak out in the middle of a party. Of course, you should remember to bring a charging cable.

JBL Xtreme 2 is a model that offers more than its predecessor and is better and stronger than the previous model. The bass is even deeper, the sound is cleaner and the possibilities are greater. This is a step forward for JBL Xtreme but without a revolution. You can still count on exemplary performance, very good work time, convenient operation, and high functionality. The sound is still modern, so it’s the perfect choice for fans of entertainment music genres.

Rather, music lovers who like light music, prefer natural and faithful music or are fans of analytical sound will not be satisfied. The sound is quite bright and sensitive with emphasized bass and high tones. In my opinion, the loudspeaker has been tuned well for party equipment, where various repertoires appear and the dominant bass could spoil many songs.

JBL Xtreme 2 costs around $250. This is a higher price shelf, but if you are looking for a durable, waterproof and efficient speaker, you should be completely satisfied with this purchase.

And one trivia in the end: In order to emphasize the purpose of this speaker, which is primarily outdoor entertainment, in JBL they remembered a great thing – the strap height adjustment is also a beer bottle opener.